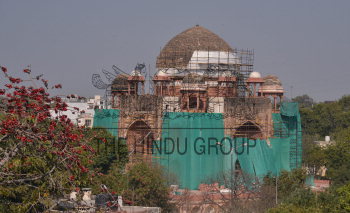 Caption : Tomb of Abdul Rahim Khan-I-Khana under renovation in New Delhi on February 22, 2019. The original monument of love built 50 years before Taj Mahal, a poet and diwan in Emperor Akbar’s court built in memory of his wife Mah Banu. It was the first Mughal tomb built for a woman constructed in 1598, the tomb stands a few hundred meters south of the Humayun’s Tomb, a world heritage site. Photo: V.V. Krishnan