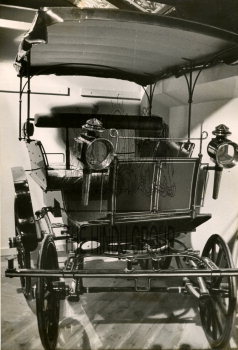 Caption : An old coach built by Simpson & Co. on display at an exhibition at Simpson office at Anna Salai on July 5, 1990. In connection with the sequicentennial (150th anniversary), the special exhibition has been organised depicting the company's growth and the changing industrial scenario. With 'The chariot of time' as its theme, the exhibition portrays the evolution of the transport sector, which has been the base of the group, and also depicts diversification into other areas, ending up with the present scene. It has been divided into convenient periods of development denoted by contemporary events in Madras. Two of the old coaches made by the company are on display. PHOTO: THE HINDU ARCHIVES / STAFF PHOTOGRAPHER