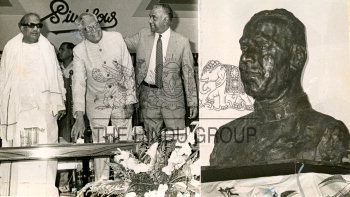 Caption : The President, Mr. R. Venkataraman, unveiling a bronze bust of S. Anantharamakrishnan, founder of the Amalgamations Group on August 18, 1990, to mark the 150th anniversary of Simpsons held at the Madras University Centinery Hall. The Tamil Nadu Chief Minister, Mr. M. Karunanidhi, and the Chairman of Simpsons, Mr. A. Sivasailam, are also seen. PHOTO: THE HINDU ARCHIVES / STAFF PHOTOGRAPHER