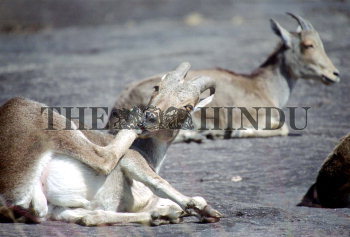 Caption : Nilgiri tahrs, mountain goats or varayaadu (Hemitragu hylocrius), at the Eravikulam National Park at Rajamala near Munnar in Kerala. It is the breeding season for the tahrs in the park. Nilgiri tahrs, also called Nilgiri ibex, live in open terrain, cliffs and grass-covered hills of the Western Ghats of South India in an altitude of 1200 to 2600 metres. Eravikulam National Park has the largest population of Nilgiri tahrs (about 750 of the endangered species). They are also found in Nilgiri Hills, Silent Valley, Siruvani Hills and the high grasslands of Anamalai. Photo: K.K. Mustafah