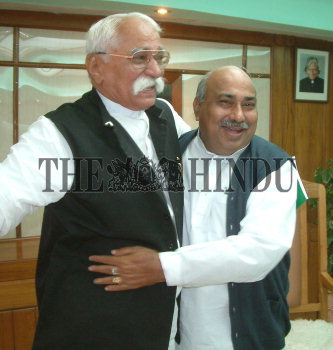 Caption : Madhya Pradesh Assembly Speaker Ishwardas Rohani hugging the senior Congress MLA Hazarilal RAGHUWANSHI after filing the nomination to the post of the deputy Speaker of the State Assembly in Bhopal on December 17, 2003. Hazarilal RAGHUWANSHI is the only candidate for the deputy Speaker's post and he will be declared unanimously elected on December 18th. Photo: A.M. Faruqui