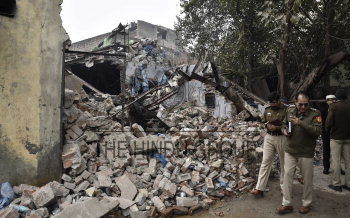 Caption : Police personnel inspect the site on January 04, 2019 after the LPG cylinder blast in a factory at Sudarshan Park in Moti Nagar, West Delhi on January 03, 2019 night, about six people were killed. Photo: Shiv Kumar Pushpakar / The Hindu