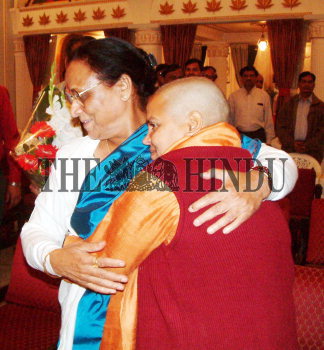 Caption : Madhya Pradesh Chief Minister Uma Bharti hugging the former Deputy Chief Minister Jamuna Devi, after administering the oath as the protem Speaker of the Madhya Pradesh Vidhan Sabha, at the Raj Bhavan in Bhopal on December 12, 2003. The maiden session of the 12th Vidhan Sabha, the winter session, gets under way on December 15. Jamuna Devi, the longest serving legislator in Madhya Pradesh, has won again from the Kukshi constituency in Dhar district. She will chair the proceedings of the new House till the new speaker is nominated. Photo: A.M. Faruqui