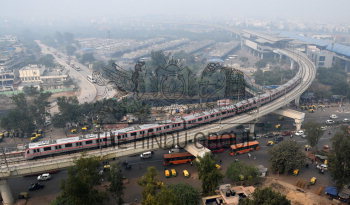 Caption : A bird eye view of Pink Line Metro passing near Anand Vihar interchange station during media preview, in New Delhi on October 29,2018. The section from Trilokpuri to Shiv Vihar will be opened to public on October 31,2018. Photo: Sandeep Saxena