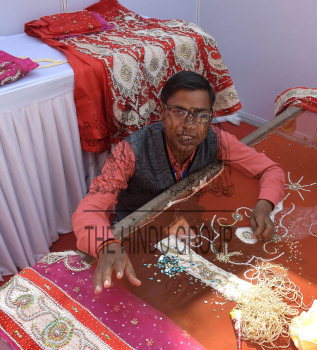 Caption : Manoj, an artisan from Shahjahapur, during "Live Demo", on the eve of four days ODOP (One District One Product) Exhibition and Sale at Awadh Shilp Gram in Lucknow on October 28, 2018. UP CM, Yogi Adityanath distributed Loan cheques to the Enterprenures/Artisans. “UP is uniquely famous for product-specific traditional industrial hubs across 75 districts. This include Varanasi (Banarasi silk saris), Bhadohi (carpets), lucknow (chikan), Kanpur (tannery industry and leather goods), Agra (leather footwear), Aligarh (locks), MORADABAD (brassware), Meerut (sports goods) and Saharanpur (wooden products) and handloom and power looms in eastern districts,’’. ODOP is expected to give a major push to traditional industries by creating effective institutional infrastructure and providing them enabling environment to flourish. The scheme also includes the promotion of Khadi and village industries which has huge potential for creating fresh jobs. Yogi had launched ODOP scheme on UP Diwas on January 24th, 2018. Photo: Rajeev Bhatt / The Hindu