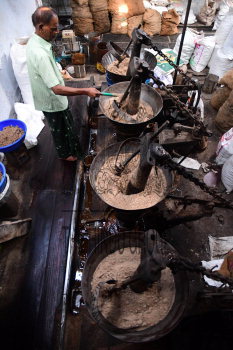 Caption : A worker extracting coconut oil in a semi mechanised traditional 'chakku' (oil extracting machine) at a small scale oil mill at Thrissur on October 06, 2018. The last one of its kind in the district, traditional coconut extracting mills are slowly becoming a thing of the past. The changed food habits and availability of other cheaper edible oils both in the edible and industrial sector have brought out a drastic decline in the use of coconut oil. The only takers for such pure coconut oil, which is slightly expensive than their contemporary in the market, are the Ayurveda companies who seek pure coconut oil for use in their products. On account of heavy imports of cheaper vegetable oil, especially of the Palmolein, the price of coconut oil has been depressed despite the large-scale price support operations undertaken. Currently the price of pure coconut oil stands at Rs 180 per kg in Thrissur market, while the price of unbranded ones start at Rs 140 and above per kg. Photo: K. K. Mustafah.