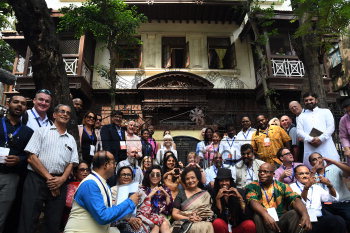 Caption : About 50 people delegation team of the US National Police Foundation from department such as, NYPD, LAPD, Miami PD along with global thinkers, Policy makers, law enforcement officials, activists, lawmakers and scholars, who are visiting India to participate in the World Summit on Countering Violence and Extremism being organised by Art of Living Foundation and International Association of Human Values and With Love from India Project, have been going around Mani Bhavan in Mumbai on September 28, 2018. It is the part of cultural immersion program to learn about the Gandhian principles of Ahimsha on the eve of 149th birth anniversary of Mohandas Karamchand Gandhi. Mani Bhavan was Gandhi's Mumbai headquarters for about 17 years, from 1917 to 1934. It was from Mani Bhavan that Gandhi initiated the Non-Cooperation, Satyagraha, Swadeshi, Khadi and Khilafat Movements. Gandhi's association with the charkha began in 1917, while he was staying at Mani Bhavan. Photo: Arunangsu Roy Chowdhury