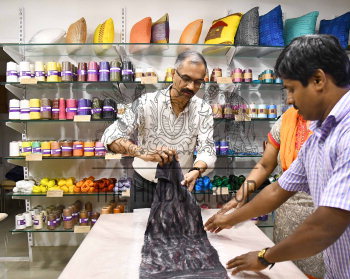 Caption : Nuno Felting workshop: Scarf making technique at Shuttles and Needles, in Fourth Avenue, Indira nagar, Adyar, Chennai on September 12, 2018. Managing Director R. Naresh is bent over, MESHing red and white wool fibres together. This is the first step of "nuno felting", a fabric creating process that mixes wool with silk, and was developed by Australian artist Polly Stirling in the early 90s. “We’ll be using this method to create scarves,” he says. “The word nuno in Japanese means cloth,” explains Naresh as he waves his hand repeatedly over the prickly blending board, entangling the loose wool fibres in the MESH of needles. He does the same with different colours of wool, and then brushes the blend to further intertwine the fibres. Photo: M. Karunakaran