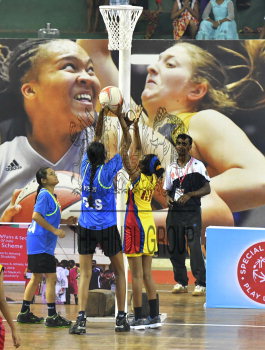 Caption : PUDUCHERRY, 01/09/2018: Special Children participating in the 1st edition of Special Olympics International Unified Girls Netball Tournament at the Rajiv Gandhi Indoor Stadium at Uppalam in Puducherry on September 01, 2018. Team Special Olympics Bharat includes athletes from Andhra Pradesh, Puducherry, Maharashtra, Delhi, Chandigarh and Punja. Each team have nine athletes, including persons with and without intellectual disabilities to team up and play. The tournament is supported by Lions Club International and Aruna Abhey Oswal Trust. The Tournament will be held on September 1 and 2. Photo: S.S. Kumar