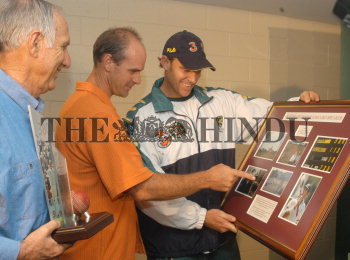 Caption : Australian opener Mathew Hayden was felicitated at a ceremony by Queensland Premier and Cricket Australia on the third day of the first Test against India at the Gabba on December 6, 2003, to commemorate his world record innings of 380 against Zimbabwe at Perth this year. His father Laurie and brother Gary also seen. Photo: V.V.Krishnan