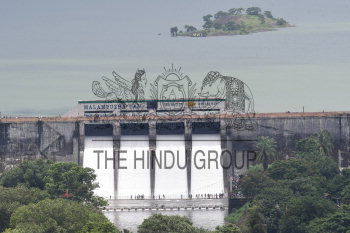 Caption : Shutters of the Malampuzha dam at Rice Bowl of Kerala were opened on August 01, 2018 as the water level in the reservoir has increased four shutters were opened by one inch each. The authorities opened the shutters as catchment areas of the reservoir received heavy rains. The Full Reservoir Level (FRL) was 115.06 meters.(377.493438 in feet). Kerala witnessing heavy rain last few weeks. Photo: K. K. Mustafah