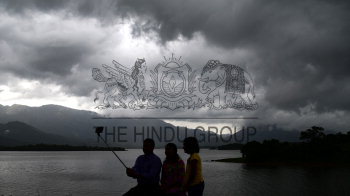 Caption : Domestic tourists taking selfie with raised water level and dark MONSOON clouds gathered over the Malampuzha dam catchment area at Palakkad on July 28, 2018. As incessant rain continues to lash the Kerala the water level in various dams has been to the rise. The water level in Malampuzha dam has been rising for the past few weeks Full Reservoir Level (FRL) touching at any time. Almost four weeks into this year south west MONSOON, the state has received 21 per cent excess rainfall thus far, shows data released by India Meteorological Department. With the four month rainy season almost half over, the rainfall deficiency in the eastern part of India, especially in Bihar and Jharkhand, has crossed the 40% mark, while a quarter of the country has received deficient rainfall, the India Meteorological Department data shows. Bihar has recorded the highest MONSOON deficiency of 48%, while east Uttar Pradesh and Jharkhand have recorded 46 and 42% respectively. The overall MONSOON deficiency in the country has, however dipped to three per cent. Photo: K. K. Mustafah