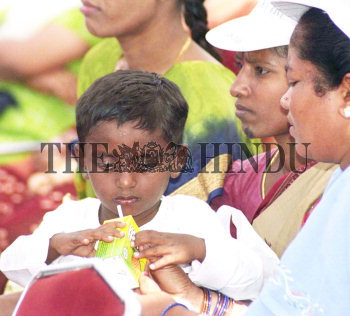 Caption : A two year old boy with HIV infection looks forlorn in Hyderabad on December 01, 2003. The State organised a massive rally to mark the 15th commemoration of World AIDS Day. According to the United Nations Population Fund, AIDS is one of the greatest THREATS to humankind with 14,000 new infections per day. The global HIV/AIDS epidemic killed more than 3 million people in 2003, and an estimated 5 million acquired the human immunodeficiency virus (HIV), bringing the total number of the virus affected to 40 million. This year the campaign highlights the theme "Live and let live" and focuses on eliminating stigma and discrimination, the major obstacles to effective HIV/AIDS prevention and care. In India, with a population of more 1.027 billion, the HIV/AIDS infection rate estimated at 0.7% of the adult population. Photo: Mohammed Yousuf