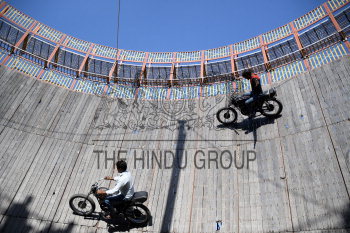 Caption : Stunt motorcyclist daredevils perform in the well of death in Srinagar on June 04, 2018. The barrel-shaped wooden CYLINDER popularly referred to as 'mout ka kuwan' ('Well of Death' is a major attraction at circus events as stunt drivers and motorcyclists virtually defy death to perform tricks. PHOTO: NISSAR AHMAD