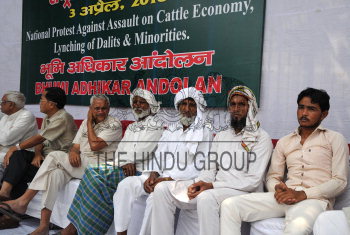 Caption : Pehlu Khan's (who was killed by mob, hundreds of vigilantes attacked his cattle trucks on a highway in Alwar in the state of Rajasthan) son Irshad (right) with other family members at the National Protest against assault on Cattle Economy, Lynching of Dalits and Minorities organised by Bhumi Adhikar Andolan, at Parliament Street, in New Delhi on April 03, 2018. Photo: Shanker Chakravarty