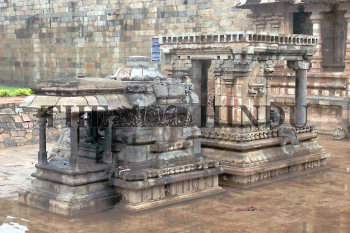 Caption : At the Airavateswarar temple in Darasuram, the Balipeetam with beautifully carved portions on both sides, has a unique feature, as each of the steps of the Balipeetam, gives a different musical note, when struck with a piece of stone. The level of the Balipeetam and the Nandi pointing to the altitude of the Sanctum Sanctorum is an arithmetic marvel. Photo: S.R. Raghunathan 16-11-2003