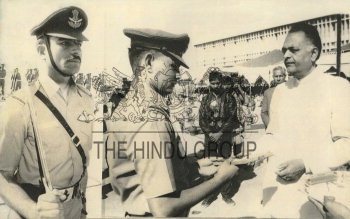 Caption : The Defence Minister, Mr. K.C Pant, presenting the Chief of Air Staff's medallion to pilot officer, Mr. Surendere Rawat, who stood first in the meteorology branch of the ground duty officers' course, at the Air Force Academy at Dundigal near Hyderabad on December 17, 1988. At left is pilot officer, Mr. Hilal Ahmed Rather who won the Nawanagar Sword of Honour for standing first in the pilots' course. PHOTO: THE HINDU ARCHIVES