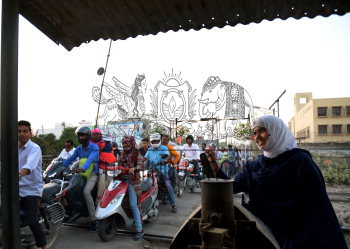 Caption : SALMA MANNING RAILWAY CROSSING: 25 years old Mirza Salma Beg of Mallihabad manning a railway crossing on the occasion of International Women's Day, near Malhaur station at the outskirt of Lucknow on March 08, 2018. International Women’s Day is a time to reflect on progress made, to call for change and to celebrate acts of courage and determination by ordinary women who have played an extraordinary role in the history of their countries and communities. Then Minister of Railways Shri Suresh Prabhu in his Railway Budget 2016-17 had announced “Mission Zero Accident” and “elimination of unmanned level crossings” formed a ‘sub-mission’ of this. It was announced that Indian Railways intends to eliminate all unmanned level crossings on Broad Gauge in the next 3-4 years for which innovative financing mechanisms are being developed. There are total 28607 level crossings in all in Indian Railways. Out of which 19267 level crossings are manned and 9340 level crossing are unmanned. Photo: Rajeev Bhatt