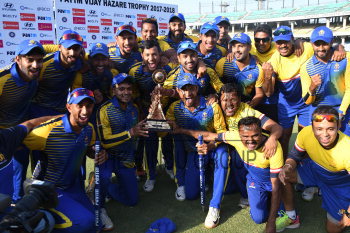 Caption : The Karnataka team celebrates with the TROPHY after winning the Vijay Hazare TROPHY one day cricket tournament, defeating Saurashtra in the final at the Ferozeshah Kotla ground in New Delhi on February 27, 2018. Photo: Sandeep Saxena