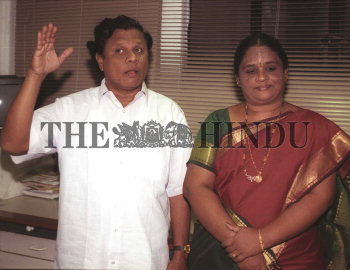 Caption : Nadaswaram exponents Sheik Mahaboob Subhani and Smt. Kaleeshabi Mahboob in New Delhi. Srirangam-based Sheik Mahaboob Subhani has been performing in partnership with his wife Kaleeshabi Mahaboob across India, the U.S., U.K., and Gulf countries among others, for the past 25 years. They are in Delhi to perform under the auspices of the Noida Hariharaputhra Samajam’s Sastha Preethi celebrations taking place at Kendriya Vihar’s Community Centre in Noida’s Sector 51. The two are disciples of the eminent Sheik Chinna Moulana, who reigned as a monarch of the nadaswaram in his time. Women nadaswaram players are a rarity, so this performing couple are unique to begin with, but their exceptional qualities do not end there. Hailing from a family with a long tradition of nadaswaram playing, Mahaboob and Kaleeshabi, who are first cousins initially trained and performed with their respective gurus in Andhra Pradesh. After their marriage they have never deviated from their duet concert format, even when Kaleeshabi took brief breaks from her career as she is also a mother of three children. Photo: S. Arneja