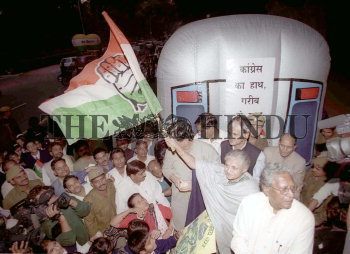 Caption : Delhi Chief Minister, Mrs. Sheila Dikshit with school children flagging off the election campaign with party flag in front of replica of Metro Rail, (helium balloon) to launch party campaign from AICC office in New Delhi on November 18, 2003. The elections will be held on December 1st. Photo: Shanker Chakravarty