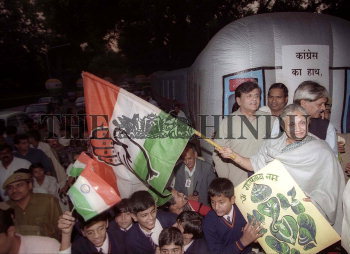 Caption : Delhi Chief Minister, Mrs. Sheila Dikshit with school children flagging off the election campaign with party flag in front of a replica of Metro Rail, (helium balloon) to launch party campaign from AICC office in New Delhi on November 18, 2003. The elections will be held on December 1st. Photo: Shanker Chakravarty