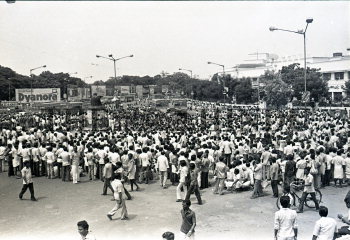 Caption : The members of JACTTEA and Government Employees and Teachers Organisations blocking traffic in support of its charter of demands including pay parity and BONUS near Simpson junction on Anna Salai, Madras on July 22, 1988. A group sat on middle of the road near Periyar statue, blocking the traffic on either side of the road and ultimately became "Rasta Rako" agitation. The police cordoned them off and diverted traffic. The police picked up some of the agitators near the Periyar Statue and sent them in PTC buses converted into police vehicles. (Report Published in The Hindu on July 23, 1988) PHOTO: THE HINDU ARCHIVES