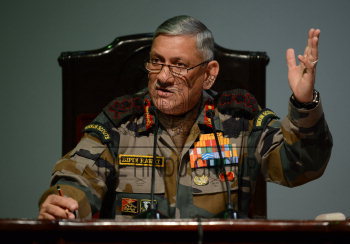 Caption : Chief of the Army Staff General Bipin Rawat addressing a press conference ahead of the Army Day, he said - India would not allow its territory to be invaded by anyone, and that China may be a powerful country but India was not a weak nation either, in New Delhi on January 12, 2018. Photo: V.V. Krishnan