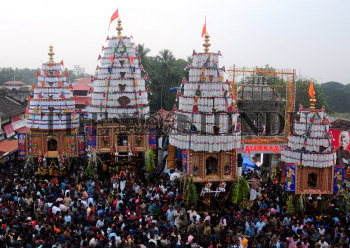 Caption : Palakkad, Kerala, 16/11/2017: CHARIOTS of Kalpathy temples stationed in front of the Viswanathaswamy temple, the main venue of the Kalpathy Car Festival, for the Rathasangamom to mark the conclusion of the three-day car festival at Kalpathy in Palakkad on November 16, 2017. Kalpathy Ratholsavam is a ten day long remarkable festival, known for its unique rituals. Situated in Palakkad district and nestled by the banks of Kalpathy River, the Sri Visalakshi Sametha Sri Viswanatha Swamy temple, is considered to be one among the oldest Siva temples in Kerala. The main ceremony of the festival is the religious procession of decorated temple CHARIOTS through the streets of Kalpathy amidst Vedic chants. The origin of this ritual dates back to antiquity. Photo: K. K. Mustafah.