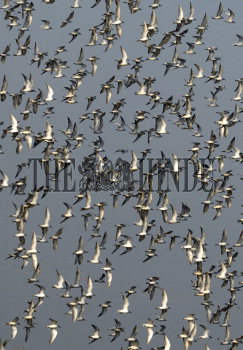 Caption : Palakkad, Kerala, 11/11/2017: Whiskered tern, migratory birds flocking skies of Kole wetlands in Thrissur. Kole wetland, a highly productive habitat forms a unique ecosystem that supports large number of birds especially migratory birds. Kole wetland, Thrissur, which is part of Vembanad Kole is a Ramsar site.241 species of birds of which 73 (30%) species are migratory Regularly supporting 20, 000 water birds for last 17 years Supports more than 1% of worldâ€™s population of the following three species of water birds such as Little Egret Egretta garzetta, Median Egret Mesophyx intermedia and Gargany Anas querquedula. In terms of the number of birds, the Thrissur Kole Wetlands is the third largest in india after Chilika Lake in Orissa and Amipur Tank in Gujarath. The National Bird Watching Day is celebrated on November 12th of every year to mark the birth anniversary of renowned ornithologist and naturalist Salim Ali, known as the â€˜The Birdman of Indiaâ€™. Photo: K. K. Mustafah.