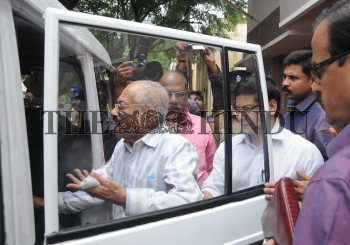 Caption : TIRUCHI, TAMIL NADU, 06/11/2017: Vallabh Prakash and his son Aditya Prakash being arrested by the Idol Wing CID police at Tiruchi on November 06, 2017 in connection with smuggling of two stone idols from an ancient Siva temple in Tirunelveli district in 1995. Photo: A.Muralitharan