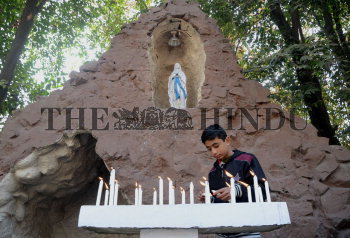 Caption : Srinagar, Jammu and Kashmir, 29/10/2017: ChriSTians pray at an altar with burning candles in the compound of the Holy Family Catholic CHURCH at the Ring bell ceremony held at the holy Family CHURCH in Srinagar on October 29, 2017. The ceremony wa held after 50 years The CHURCH Bell, largeST of its kind in the STate weighs 105 Kgs and is a gift from a Kashmiri ChriSTian family The British era CHURCH, built in 1896 had loST its original bell when a fire gutted the belfry on 7th June 1967, in an arson incident.PHOTO/NISSAR AHMAD.