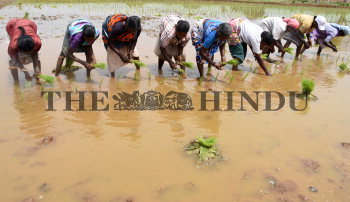 Caption : TIRUCHI, TAMIL NADU, 21/10/2017: Farmers remove paddy saplings as they prepare to replant their paddy FIELD for this year, gearing up for samba paddy cultivation, following the release of water for irrigation from Mettur. A view at Kondayampettai in Tiruchi on October 21, 2017. Photo: M. Srinath