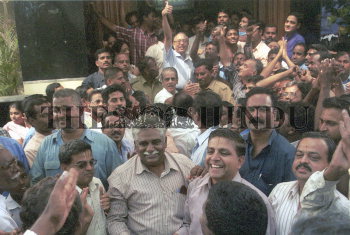 Caption : Jubiliation at The Hindu in Chennai on November 10, 2003 following the Supreme Court's stay of the arrest orders. The Supreme Court stayed the WARRANTS issued by the Speaker of the Tamil Nadu Legislative Assembly for the arrest of the Editor of The Hindu, N. Ravi and four others and that of S. Selvam, Editor of the Tamil daily, Murasoli. The WARRANTS had been issued in pursuance of a resolution passed by the Assembly on November 7 sentencing them to 15 days' simple imprisonment for breach of privilege of the House. Photo: K. Pichumani