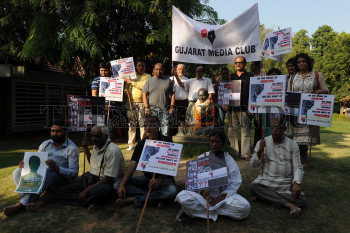 Caption : Ahmedabad, Gujarat, 02/10/2017: The Gujarat Media Club members joining nationwide silent protests over the spate over the killings of journalists and threats to them at Sabarmati Gandhi Ashram on October 02, 2017. Photo : Vijay Soneji.