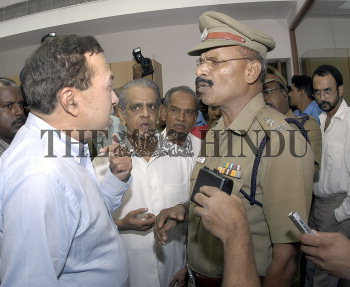 Caption : N. Ram, EDITOR-IN-CHIEF of The HINdu seen havINg a heated argument with Deputy Police Commissioner R. ChINnaraj when he came to The HINdu office with an arrest warrant on November 07, 2003 IN Chennai. The Tamil Nadu Assembly sentenced the Publisher, the EDITOR, the Executive EDITOR and two senior journalists of The HINdu to 15 days simple imprisonment for breach of privilege. Photo: VINo John