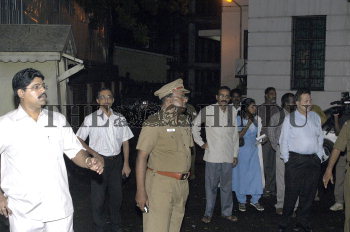 Caption : Police officers fromTriplicane wing ( Asst Police Commissioner Shammugam- Centre) leaving The Hindu office when Mr.N. Ram, Editor in Chief asked them to produce valid documents which brought them inside the office campus on November 07, 2003. The Tamil Nadu Assembly sentenced the Publisher, the Editor, the Executive Editor and two senior journalists of The Hindu to 15 days of simple imprisonment for breach of privilege. Photo: Vino John