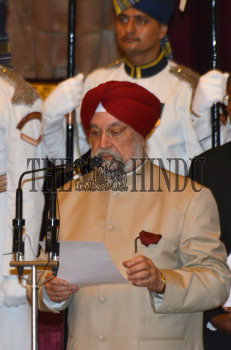 Caption : NEW DELHI, 03/09/2017: Minister OF State Hardeep Singh Puri being administered OATH OF OFfice by President Ram Nath Kovind (not in pic) during the Swearing in Ceremony at the Rashtrapati Bhavan in New Delhi on Sunday. Photo: R.V. Moorthy