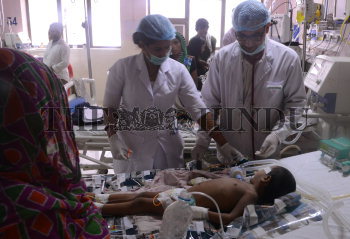 Caption : GORAKHPUR, UTTAR PRADESH, 16/08/2017: Doctors provide treatment inside the Ecephalitis ward (FILES) - A total of 290 children died at Baba Raghav Das (BRD) Medical College in Gorakhpur in August, 213 of them in the neonatal ICU AND 77 in the encephalitis ward, principal P.K. Singh said. There have been 1,250 deaths since January this year at the HOSPITAL, especially in encephalitis, infant AND children’s wards, he said. Giving a break-up of the casualties at the HOSPITAL, Singh said 37 children have died on 27 AND 28 August, of whom 26 died in the neonatal ICU (NICU) AND 11 in encephalitis ward. Photo: V.V. Krishnan