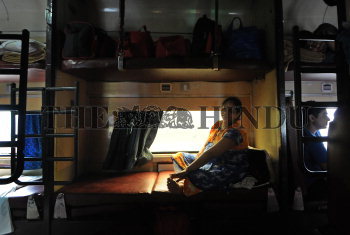 Caption : Mumbai, Maharashtra, 30/08/2017: The seven-month pregnant woman, Anandavalli, the passenger of third AC, Coach B1, 23 of Nagercoil- Mumbai CST Express stuck in the train between Arthur Road and Currey Road stations from 12.30 pm of August 29, to 11 am on August 30, 2017. The train got stranded soon after it started from Mumbai CST, as the track got drowned in the torrential rain and a Thane bound local went out of service ahead of the express train on the same track. Many people evacuated the train and braved the water-logged track and reached the nearest station. But Anandavalli couldn’t take the risk as she was in her mature state of pregnancy. There was no confirm announcement from the Indian Railways that the train has been cancelled or when it would start. The hundreds of passengers who were stuck in the train hoping that train would resumes its journey, had to face a traumatic night in their compartments without power and supply of food. The limited supply from pantry car was not sufficient for the passengers lived in the train. When I met her in the train on Wednesday morning by 10.30 am, she told that she is going to join her family at Tirunelveli for the delivery of the baby. She narrated her traumatic time at night as the AC and fans were not functioning. Pandaram Thever, the husband of Anandavalli had confirmed by 1.15 pm, that train finally started its journey for Nagercoil.. Photo: Arunangsu Roy Chowdhury