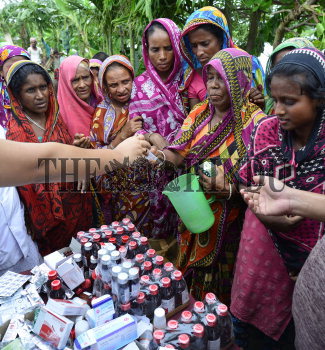 Caption : Morigaon, Assam, 21-08-2017: Flood victims collects medical relief distributed by the Jhargaon Public Health Centre (PHC) during a medical camp in the flood affected Morigaon district of Assam on August 21, 2017. The second wave of flood, which began on August 10, 2017, has affected a total population of 33,45,442 and has so far taken a toll of altogether 49 human lives. Altogether 2,970 villages under 82 revenue circles of 25 districts are still submerged by floodwaters. Photo: Ritu Raj Konwar