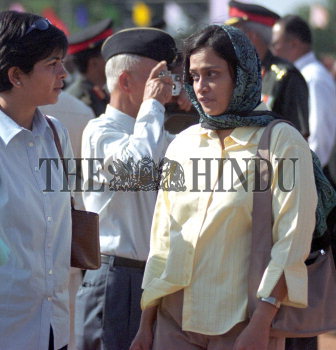 Caption : The Hyderabadi battalion of the Bison Division celebrated its 150th Raising Day at the Maitra Stadium, Bolarum, on November 05, 2003. This Hyderabadi battalion has a unique history, and had been raised on Nov. 5, 1853 by Raja Rameshwar Rao I of the Wanaparthy Samasthan, which is located about 100 km from Hyderabad. The Nizam had appointed the Raja as inspector of his army and after the Raja's death in 1866, the battalion was absorbed into the Nizam's Army and became its nucleus. Subsequent to the Hyderabad State's merger with the Indian Union in 1948, all units of the Hyderabad State Force were disbanded with volunteers who wished to serve with the Indian Army being posted in this battalion, which was the only unit to be absorbed into the Indian Army. The unit has a unique mixed class composition with no sub-unit or rank structure based on class. Troops celebrate Hindu and Muslim festivals together. Popularly known as the "Hyderabadis" in the Army, the battalion participated in Operation Riddle in 1965 and was awarded theatre honour "Hilli" for its role in Operation Cactus Lily in 1971. The "Hyderabadis" have also participated in Operations Trident, Rakshak, Vijay and Parakram. Currently, Col. Gurmeet Singh commands the battalion. Photo: P. V. Sivakumar