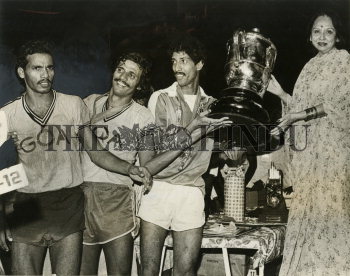 Caption : Goan skipper Brahmanand receiving the Santoth Trophy from Indira KHURANA, wife of the State Governor, S.L. KHURANA, after Goa beat Punjab 1-0 in the National football championship in Madras on April 15, 1984. Others in the picture are (from left) Francis D'Souza, Camilo Gonsalves and Damodar. PHOTO: THE HINDU ARCHIVES