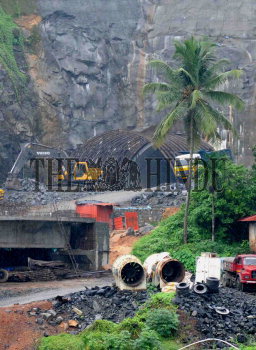 Caption : Palakkad, Kerala, 16/07/2017: Construction works of two tunnels with a distance of two km inside the forest area in Kuthiran under progress on the National Highway Mannuthy- Vadakkanchery at a view from Villanvalavu. The National Highways Authority of India (NHAI) has further directed to increase the security measures in the tunnel. Even though the drilling works were completed earlier, the bridge connecting road and the tunnel is yet to be completed. The work is being delayed due to the rainy season. NHAI has directed the firm to carry out Gantry concreting in more areas inside the tunnel to prevent the seepage of water. Here the inner side is concreted to a thickness of 50 centimeters. Earlier this was carried out only in areas where hemispherical metal sheets were attached and in other areas cement mixture were sprayed over the rocky structure. Photo: K. K. Mustafah.