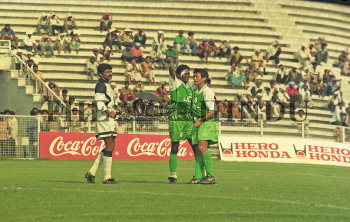 Caption : JCT's I. M. Vijayan (centre), who scored four goals including a hat-trick, celebrates with teammate Baichung Bhutia after scoring his first goal, in the Kalyani Black Label Federation Cup football tournament at the Ambedkar Stadium in New Delhi on July 14, 1996. At left, is Titanium's Md. Sajid. PHOTO: THE HINDU ARCHIVES