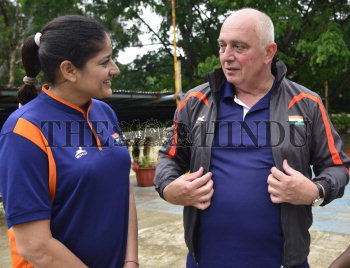 Caption : BENGALURU, KARNATAKA, 16/06/2017: Zoran Visic, new head coach of the Indian National Women's Basketball team, with assistant coach Shiba Maggon, at the media interaction, in Bengaluru on June 16, 2017, regarding the team's preparations in the lead up to the 2017 FIBA women's Asia Cup, that will be held in Bengaluru from July 23 to 29, 2017. Photo: K. Murali Kumar