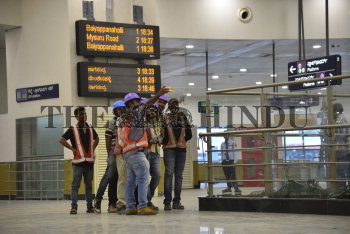 Caption : BENGALURU - KARNATAKA - 14/06/2017 : Namma Metro Kempegowda under ground station, the main interchange station allowing passengers to transfer between the Purple Line and the Green Line, getting ready for the inauguration, which is all most completed and will open for public from June 18, part of Namma Metro Phase 1 - by Bangalore Metro Rail Corporation Ltd (BMRCL), in Bengaluru on June 14, 2017. President Pranab Mukherjee will formally inaugurate the 10.5-km stretch of the Green Line between Mantri Square Sampige Road and Yelachenahalli Metro stations on June 17. Commercial operations will begin the next day. This will mark the completion of the 42.3km network of Phase-1.The deadlines for Phase-1 have been pushed since December 2012, to December 2013 and trend continued and the deadlines were postponed to March 2015, September 2015, December 2015, November 2016 and then to April 2017. Photo K Murali Kumar