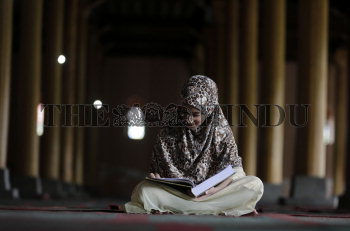 Caption : Srinagar, Jammu and kashmir, 14/06/2017: Kashmiri Muslim girl recite Koran fasting month of RAMADAN at historical Jamia Masjid in old city Srinagar on Wednesday. Muslims around the world celebrate the holy month of RAMADAN by praying during the night time and abstaining from eating and drinking during the period between sunrise and sunset. RAMADAN is the ninth month in the Islamic calendar and it is believed that the Koran’s first verse was revealed during its last 10 nights. PHOTO/NISSAR AHMAD.