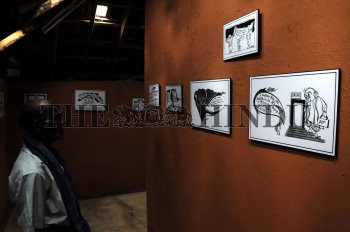 Caption : Palakkad, Kerala, 10/06/2017: A permanent display of legendary writer O.V. Vijayan's cartoon, photos, documentary film and writings exhibited at Njattupura, the abode of the writer at Thasarak, Palakkad. The compilation is the work of years of dedication and relentless pursuit by the members of O.V.Vijayan Smaraka Samithi, Palakkad. The famed Njattupura, a rustic building used to store rice seeds and agricultural implements where protagonist Ravi of O.V. Vijayan’s magnum opus Khasakinte Ithihasam (Legends of Khasak) Believed to be more than a century old, Njattupura was a temporary shelter for Vijayan during the late Fifties and Sixties. Thasrak formed the setting of his first novel when he stayed there along with his sister, who was appointed at the single-teacher school in the scenic village located on the outskirts of Palakkad, way back in 1956. Photo: K. K. Mustafah.