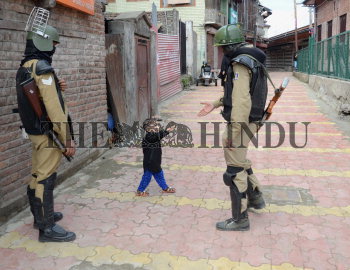 Caption : Srinagar, Jammu and Kashmir, 08/06/2017: A boy shake hands with CRPF personnel during a restriction in downtown Srinagar on June 09, 2017. Authorities in the Kashmir Valley imposed restriction on Friday to prevent separatist-called protests against the killing of a youth in firing by Security forces earlier this week. PHOTO: NISSAR AHMAD